The Portage College Museum of Aboriginal Peoples' Art and Artifacts (MOAPAA) has been awarded $112,500 from the Government of Alberta through the Alberta Foundation for the Arts (AFA) to commission three pieces of work from Indigenous artists for MOAPPA's Celebrating New Dawn project. "The "Celebrating New Dawn" project is an opportunity to mark the anniversaries of Portage College and the Museum of Aboriginal Art and Artifacts. It's a wonderful way to recognize the long history of these organizations in north eastern Alberta, and create a legacy that celebrates and fosters understanding and appreciation of Indigenous heritage and culture. "The Alberta Foundation for the Arts is thrilled to support the creation of three new public art projects in Lac La Biche. As works formally acquisitioned to the AFA art collection, the AFA will take great pride in caring for and preserving these works in perpetuity for the enjoyment of all Albertans." Said Liam Oddie, Chair of Alberta Foundation for the Arts.

The three public art commissions will celebrate the rich Indigenous cultural and natural heritage that are at the roots of our organization, community and province. These artworks will connect significant areas of the college's Lac La Biche campus including: the main foyer, the Indigenous Arts Centre, and the new Environmental Sciences Building which is also used for traditional hide tanning.

The project's general concept asks that artists consider the importance of the context of the organizational history, the location in Treaty Six territory and the natural and human heritage of the area as central to the creation of the artwork.

The expected results of this project is to: create a legacy that celebrates and fosters understanding and appreciation of Indigenous heritage and culture and how it connects and inspires contemporary artwork; showcasing artists in a large scale, public setting that will encourage community connection with the artwork and to provide an opportunity for talented artists whose work celebrate the natural heritage of north eastern Alberta.

Stewart Steinhauer Saddle Lake Cree Nation was commissioned by the Alberta Foundation for the Arts to create this powerful statue for display at the Portage College Lac La Biche campus. The statute is Newokatew-ayisiyin’ (Four-legged Spirit Being). Newo means four, kātew means having legs, and ayisĪn means a non-human being from the spirit realm, whatever that might be. Put together it has a new specific meaning, the big bear, a grandmother/grandfather being whom he met while fasting in the mountains. The Bear is the guardian of the land, and also earth healer. In Cree culture, the Bear Spirit helps bond the humans to the earth. The sculpture is in Cambrian Black granite, mounted on field stone. ‘We are all related’ in cree syllabics and in English is hand-carved into the field stone. 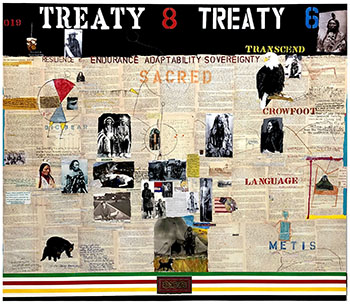 Watch the video below as Jane talkes about her art

Watch the video below as Jason talkes about his art 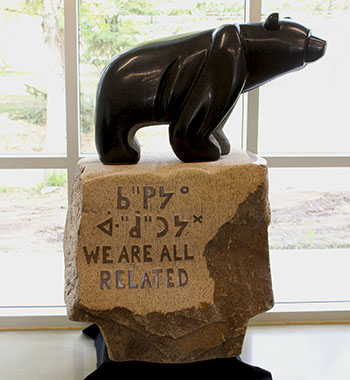 Watch the video below as Stewart talkes about his art