Students’ Association to present special gift at Round Dance

The Students' Association of Portage College (SAPC) have made a generous donation to the Portage College Museum of Aboriginal Peoples' Art and Artifacts (MOAPAA). Jessekan, an acrylic painting by Eddy Cobiness, was purchased for $15,000 and will be presented to MOAPAA's museum curator Joseph Sanchez at the 16th annual Round Dance on Saturday, March 16th.

Cobiness, who passed away in 1996, and Sanchez, are two of the seven artists of the Professional Native Indian Artists Incorporated (PNIAI), also known as the Indian Group of Seven. Cobiness' painting will be added to MOAPAA's permanent exhibit of the PNIAI, the only place in the world where works of the entire group are on exhibition together.

At the SAPC's Fall AGM, students felt that they should direct some of their surplus funds towards MOAPAA. "Ultimately, the students wanting to be a part of the College in a bigger way is what inspired us," said Megan Shott, SAPC Vice President Academic.

Formed in 1972, the PNIAI is to date one of the most important alliances formed in Canadian art history. The mandate of the group was to take the work back to the Indigenous People, to educate everyone on the aesthetic of the groups work and why it cannot be compared to contemporary art, to show Indigenous People that they could be successful creating work about themselves and their people, and to inspire and mentor a whole new generation of Indigenous artists.

MOAPAA is working with Sanchez to develop a permanent archive and historic record of the PNIAI at Portage College. Sanchez will continue to work with private collectors to have significant works from the group bequeathed to the museum. Some of the significant pieces important to the collection however, are also in galleries for sale. One such piece was Cobiness' Jessekan. This powerful large 40 x 50 inch original acrylic-on-canvas was painted in 1974. The painting represents spirits that came to Eddy during a Shaking Tents ceremony.

When asked, how the SAPC sees the benefit of this piece to the community, Shott replied that "this is only the beginning of MOAPAA. I think it'll become a staple in the community as it grows, just as the College is a pillar of the community. If artists like Sanchez and [Alex] Janvier feel that Portage is the place to show their work, I would imagine that it will influence students of any age that want to showcase their art, too." 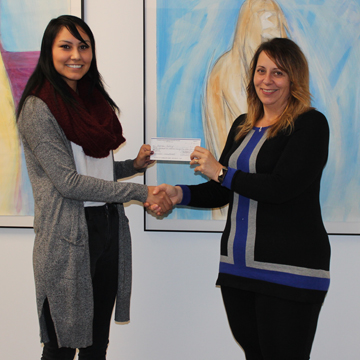 The Round Dance is open to the public. We ask that no photographs or video be taken during the first four songs of the event.

*An earlier version of this article detailed the Jeesekan painting on meaning, "It speaks to residential schools, the loss of a culture, and Turtle Island". This meaning could not be verified and has been corrected above.