A long-time collector of Canadian Indigenous art has deepened the holdings of the Portage College Museum of Aboriginal Peoples' Art and Artifacts by donating a diverse array of materials.

The 152 items, predominantly Inuit in origin with some pieces by First Nations and Métis artists, were collected over the past 50 years. They include carvings, prints and fabric wall hangings, as well as such artifacts as baskets, moccasins, tanned leathers, games, tools and weapons. Among the artists included are Ojibway painter and printmaker David B. Williams, Inuit carver Mary Ayaq Anowtalkik and Métis painter Ayla Bouvette.

Valued at more than $76,000, the donation is from Dr. Michael Mucz, a retired professor of biology at the University of Alberta’s Augustana campus in Camrose, Alta.

“It gave me real pleasure to know they would be used in an educational setting,” said Mucz, who once thought he would run a small business selling Indigenous art in his retirement.

Instead, Mucz discovered the ideal home for his collection when he toured the College’s museum while vacationing in Lac La Biche in 2021.

“I was really impressed with what was on display and even more so by meeting Donna and Ruby (Dr. Donna Feledichuk, museum director and vice-president academic and research and Ruby Sweetman, collections manager and program coordinator, Native Arts and Culture),” he said. “I knew they would make sure (the gift) was used in a way that’s appropriate.”

The Portage College Museum of Aboriginal Peoples’ Art and Artifacts was established in 1978 as a teaching collection for the school’s Native Arts and Culture programs. Today, it houses the world’s only permanent collection of work by the Professional Native Indian Artists Inc. Known informally as the “Indigenous Group of Seven,” the collective was founded by artists Daphne Odjig, Alex Janvier, Joseph Sánchez, Norval Morrisseau, Eddy Cobiness, Carl Ray and Jackson Beardy.

“We are truly grateful for this welcome addition to our collection,” said Dr. Feledichuk.

“Dr. Mucz spent numerous hours with me and Ruby going through the works and the stories to some of the acquisitions. This donation increases our Inuit collection immensely and augments other exhibits in our museum. The stunning wall hangings showing such detail and craftsmanship will be wonderful tools in teaching traditional sewing in our Native Arts and Culture program.”

Mucz launched his collecting career with two small soap stone carvings he purchased as a PhD student, while working on Devon Island, Nunavut, in the 1970s. Intrigued by the artistry and quality of the work, the use of natural resources and the emotions the art stirred in him, he began searching for other Indigenous art online, at auctions, art galleries and antique shops.

Soon, he was equally intrigued by vividly coloured and intricately sewn wall hangings, beautifully crafted artifacts and art by such distinctive but underrated painters as Ayla Bouvette, an American Métis who lived in Sault Ste. Marie, Ont.

Among Mucz’s favourite pieces in the donation is a catlinite (pipestone) carving of a warrior reaching out to a bison skull. 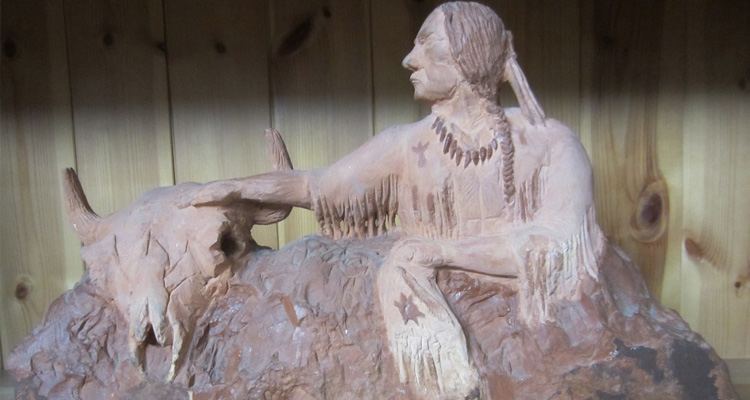 Mucz says that giving that piece and the accompanying collection to the college feels much better to him than it would have to auction them off. It’s important to him that in addition to students and visitors to the museum studying the craft, the underlying stories will be preserved. That’s a lesson he learned a decade ago, when he published Baba’s Kitchen Medicines, a book of folk remedies practised by Ukrainian settlers in Western Canada.

“As I was collecting information from the elderly children and grandchildren of the original settlers, my lack of urgency in starting the collection lost me invaluable ancestral knowledge,” he said, noting that some potential sources died before he could speak to them.

“That left a real impression on me. If somebody doesn’t collect something, it’ll be lost. There’s a lot of knowledge that will be lost when its keepers are gone.”